Corpus Christi, Texas has played a key role in many historically significant events that have shaped United States.  Whether being the site of one of the last battles of the American Civil War or becoming the birthplace of the League of United Latin American Citizens, Corpus Christi’s unique location on the coast of Texas and its proximity to Mexico has generated plenty of historical moments in the fabric of American culture.

On November 4, 2017, Old Bayview Cemetery comes alive with the colorful stories of the historical figures that have helped shaped the Coastal Bend. The Voices of South Texas is a walking tour of the cemetery- complete with historical reenactors - and it retells the stories of those that are buried there - including veterans of the War of 1812, the Texas War for Independence, the Mexican War and later conflicts.

Old Bayview Cemetery is the oldest federal military cemetery in the State of Texas that came into being during the Mexican War when the fallen soldiers of General Zachary Taylor’s army were buried at a site near the encampment on the Corpus Christi Bay.  Nestled between old mesquite trees in the bustling Sports Entertainment and Arts District of downtown Corpus Christi, this historical landmark features many of the founders of Corpus Christi and Nueces County.

Once the last military solider was buried there, Old Bayview Cemetery became a community burial ground - and was one of the few desegregated cemeteries in the Coastal Bend.

There are many stories that live within the cemetery and Voices of South Texas covers just a few.  The Friends of Old Bayview Cemetery are working to restore this historical monument back to its previous glory.

Find out more about the people buried at Old Bayview Cemetery and discover the rich history of Corpus Christi. 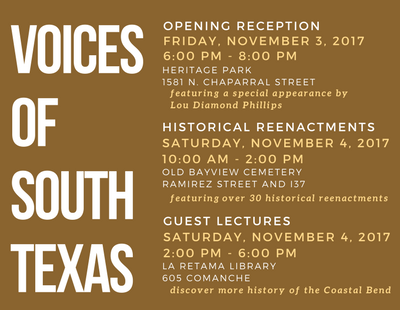